After quitting her comfortable California lifestyle, Thai entrepreneur Ally Chonlakarn knew that setting up a business in China without a local business partner might be the most difficult part of the process, so she set out to choose her industry carefully.

Her options were slim, but when Chonlakarn realized that the restaurant industry allowed foreigners to set up Wholly Foreign-Owned Enterprises, she knew it was destiny.

“The food and beverage industry is the easiest one to access for foreigners like me,” Chonlakarn said in an interview on a sweltering afternoon at her 20-seat restaurant in Beijing’s Chaoyang district. “I had to consider which industries complied with my requirements. I had limited capital and a foreign passport. F&B was the easiest one for me and for many foreigners.”

Chonlakarn considered that it might be easier to have a partner to help her set up and run the business, but she decided to put the skills she learned from her University of Southern California MBA to the test.

“Sometimes when you have a partner you might have conflicts. The attitudes or the way you want to run the business itself don’t match,” Chonlakarn, who is in her 30s and unmarried, said. “I checked with the lawyers here and realized that the F&B businesses could be wholly foreign-owned.”

After earning her MBA and working for a couple of years, Chonlakarn said that she left California to be closer to her family in Thailand. She also wanted to avoid the typical 9-to-5 lifestyle that is common in suburban San Jose—it felt too comfortable and stagnant for her spirit.

Her mother tried to convince Chonlakarn to move back home closer to her family, but she knew she didn’t want to return to Thailand. China’s emerging middle class and the promise of a new adventure enticed her.

A report by management group JLL, Inc. found that “overall foreign food and beverage company expansion rates were over 20% year-over-year in 2015.” F&B is one of China’s most active industries for growth due to the burgeoning consumer culture of the middle class, with full-service restaurants in China generating $408 billion in revenue in 2016 according to a report by IBISWorld.

Chonlakarn knew always loved cooking Thai food and she would sometimes cater small parties for company gatherings during the three years she lived in the U.S., so with these considerations in mind she soon realized that opening a Thai restaurant in northern China would be her strongest option. Beijing, with its millions of people eager to try new foods and spend money on dining out, seemed a better fit than Shanghai where the market is more saturated with foreign food.

Chonlakarn, who grew up seeing how her parent’s plastic molding business was run in Thailand, knew she needed to conduct extensive research before launching a Thai restaurant. Her market research turned up the promising statistic that there is only one Thai restaurant for every 500,000 or more Beijingers.

“There are about 40 to 50 Thai restaurants in Beijing—the whole city—which for the market size of Beijing is pretty small compared to the demand,” she said. “There are 2 million Chinese tourists to Thailand every year, and they come back liking the food and flavors, so this proved to me that I’m going in the right direction.”

Nearly half of Chinese consumers relish the opportunity to be “adventurous” and to develop new food and beverage tastes, compared to 34 percent, according to a 2016 research report by Kantar TNS. Chonlakarn knew that the Chaoyang district, with its cosmopolitan residents, would be the right fit.

She also knew that there was a simple, yet powerful, story she could tell with her food: “A Thai lady who really loves eating wants to offer Thai food to the northern Chinese market that doesn’t currently have authentic Thai food.”

The process of setting up a restaurant is relatively straightforward in Beijing, but Chonlakarn said that doing it alone was incredibly daunting, especially for a not-so-imposing figure with a bubbly personality and a tinkling laugh.

“My mom came here to help me finalize the business documents, but the research and everything I did on my own,” she said. “It was my first time doing everything on my own.”

While Chonlakarn’s business registration for Sa Thi went smoothly, her gender was one early aspect that made opening a restaurant more difficult than she imagined.

“I would say 90 percent of restaurant owners are male,” Chonlakarn said. “Some customers will come in here and call my manager 老板 (Mandarin for “boss”) because they assume most people with businesses here are male, especially in the restaurant business.

“The market is still male dominated—that’s quite acceptable and true of most of the Asian countries—however, an advantage of being a female entrepreneur for me is that it is kind of a gimmick for people that this small restaurant is run by a Thai lady who can speak fluent Chinese,” she said.

Even though Chonlakarn made it to the opening day of her restaurant, she said that the first three months were some of the toughest of her life.

“When I did the calculations I thought I would break even in three months, but I did not,” Chonlakarn said. “My first restaurant team wasn’t really great, so the first three months was one of the worst times of my life. I felt that I couldn’t manage people, that I couldn’t influence them to work [the way I wanted], I couldn’t train them and they were not really following me. Maybe they didn’t believe in because it seemed that I didn’t believe in this project. Everything was kind of collapsing.”

Chonlakarn credits her survival to her decision to allow herself to be sad about her challenges, and also her active choice to move past the sadness and to keep fighting.

“It was my first time doing everything on my own.”

In the fourth month, Chonlakarn said, things started getting better. She got repeat customers and they brought their friends.

Zhao Danyang, a teacher, has known Chonlakarn for about a year. Zhao first came to Sa Thi as a customer and as she got to know Chonlakarn she kept coming back for both the food and the friendship.

“I admire her honesty, her enthusiasm and her strong sense of self-awareness,” Zhao said. “She’s super energetic and focused and has a very charismatic smile that attracts plenty of customers, me included.”

Chonlakarn said this turn encouraged her to start believing in herself more. Then, in the sixth month, she finally broke even.

“The first year is the most difficult,” Chonlakarn said. “You realize you have to learn how to deal with your team. After the problems have been settled and you’ve found a great team, the second difficulty is your customers. They have to trust you and value what you serve.”

A problem for her was menu pricing. Chinese consumers are accustomed to inexpensive dining, and some thought her restaurant was too expensive. A Thai-style whole fish dish is ¥121 and a mango sweet rice is ¥40. 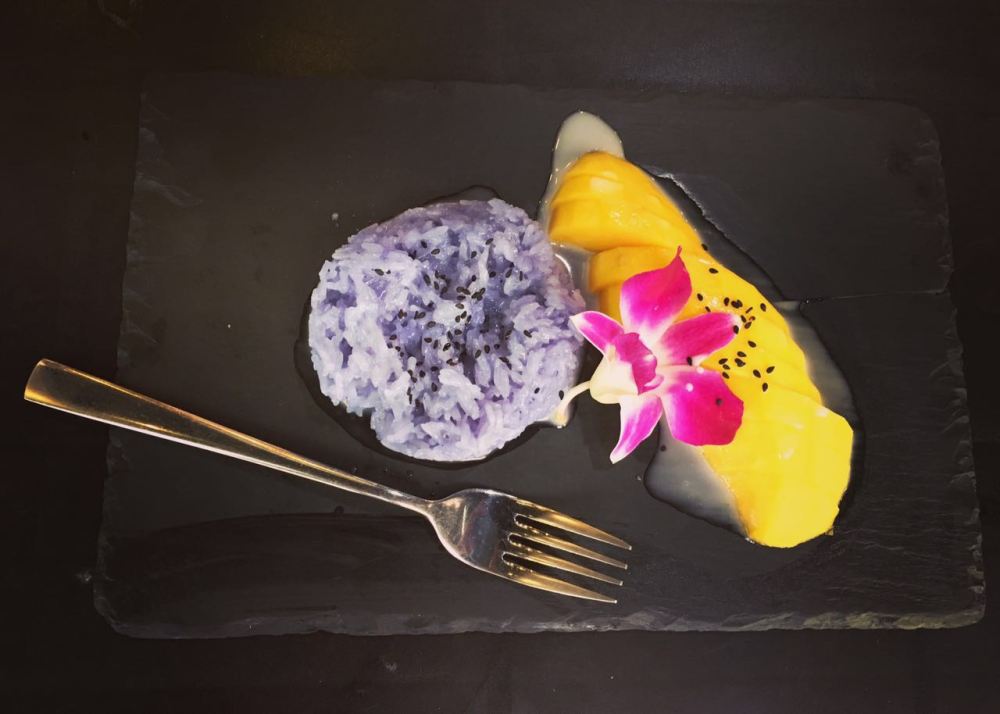 “When people came here they said that the prices were too high, but my background was finance so I knew that the company needs a profit. I had to remind myself that the customer who really likes the food won’t believe it’s too expensive. If they are complaining about the price, then they probably aren’t my target customer.”

In addition to managing customer expectation, managing employees was another new challenge for her. Chonlakarn decided early on that her small business would require everyone involved to contribute equally to the success of the restaurant. This created some issues between Chonlakarn and her initial round of hires who weren’t used to this ethos.

“The first chef I hired was very good, but he carried the idea that he was the chef and he didn’t want to do the little jobs,” Chonlakarn said. “I’m the owner, but I don’t say, ‘I’m the owner so I don’t do little jobs.’ No. I clean the plates. I stand on the street and hand out leaflets so I can see how people react and how effective the leaflets are at marketing the restaurant to potential customers.”

Chonlakarn said that this drive to see her projects through and to be involved every step of the way came from her mother. After Chonlakarn’s father died, her mother took over the family business and continues to run it today, expanding the customer base and entering new markets.

“One thing my mom taught my brother and I that is very much in the American style is you teach the kids how to use the equipment to go fishing by themselves,” Chonlakarn said. “You’re not just pampering them by feeding them fish. I learned to stand up by myself. That really helped me out, because when you are facing a problem or difficulty you can solve it on your own.”

“If they are complaining about the price, then they probably aren’t my target customer.”

Liu You, who began working as the manager for Sa Thi in October 2016 said that he’s previously worked in three or four restaurants, but that he enjoys working for Chonlakarn the most.

“I was working at a coffee shop that had recently closed, and Ally came over and asked me if I wanted a job,” Liu said in an interview at the restaurant. “I love working here because I love the food and I love the team.”

“I decided to give the restaurant a shot and the food turned out to be amazing,” Cao said. “Ally came and talked with me and told us the right way to eat the special fish and shared her stories. We laughed a lot and became friends in about five minutes.”

Cao said that Chonlakarn’s success with her employees and customers is based on a number of factors—mainly that she balances typically male and female characteristics with ease.

“She is independent enough to organize the process of running a restaurant in Beijing, which is a tremendous amount of work, and yet she is thoughtful and caring,” Cao said. “She will tell jokes to make you laugh and she gives her attention to each customer.”

As Sa Thi approaches its one-year anniversary, Chonlakarn said she hopes the customer base will continue to grow, but that she is confident in her choice to start a Thai restaurant.

“At the end of the day, I feel proud of it because I see the restaurant’s progress,” Chonlakarn said. “Thai is still niche food. People have to give us a try first, but after they try it, I guarantee they’ll like it.”